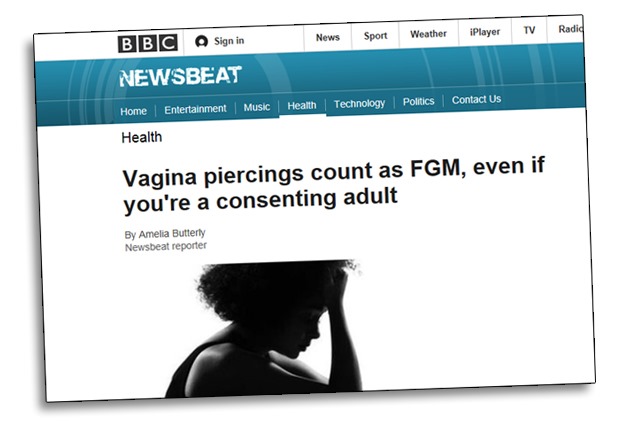 A story on the news caught my eye this morning, but not for the reason you were probably thinking.

Read this >> Vagina piercings count as FGM, even if you’re a consenting adult .

Apparently, according to the Department for Health, women who have piercings down below will now be considered to be victims of Female Genital Mutilation.

Let me just say that again in case you missed it. Grown women, of full mental capacity, who make their own decision, of their own free will, to have their private bits pierced, will now be considered victims of a vile and disgusting crime … which by default, must have been committed by well trained staff at highly regulated, clinically clean, piercing parlours.

Now I’m no expert in this, mainly due to lack of available and willing research subjects this morning, but if we can’t tell the difference between a grown woman who wants to have a piercing on her body, no matter where it might be, in a safe, sterile environment, and a young child held down on a grotty back street kitchen table, often by their own family, whilst some complete stranger hacks away at their body for the sake of it, we might as well all pack up and go home now.

It’s also worthy of note that Male genital piercings are not a problem. If that’s not a prime example of double standards, feel free to tell me what is !

Let’s just get this straight. Female Genital Mutilation is VILE. It’s an outdated, barbaric ritual, carried out for culturally backwards reasons intended for the sole purpose that the young girl being violated is not able to enjoy sex as a willing partner, with a willing partner, later in her life … which if you think about it, is the polar opposite of piercings which are intended to actually increase or intensify a womans’ pleasure.

So we have to ask the question, what on earth is the purpose of such a decision ?

We know that FGM is vastly underestimated and vastly underreported. We know it goes on but I think we would be kidding ourselves if we thought we were even touching the tip of the iceberg.

All that a ludicrous move like this will do is swamp the statistics relating to FGM offences, immediately masking, burying, hiding or diluting the true picture of such an horrific crime, and make it far, far more difficult for the police and other agencies to devote adequate resources (especially with fast dwindling budgets) to tackle to true offenders in this.

So ladies, (and gents), I say, if you want to stick things in your bits, crack on and fill ya boots !